On the evening of May 2, 2022, Politico published a leaked draft opinion in the court case pitting the state of Mississippi against a women's health provider in the city of Jackson. It is believed that the case was one of a flood of legal challenges crafted for today's conservative Supreme Court to overturn the Roe v. Wade decision.

Disclosure: AB9IL.net is a participant in the Amazon Services LLC Associates Program and others, such that this site earns advertising fees by linking to commercial offers. If you make a qualifying purchase after clicking a link on this website, the associate affiliated with this site may earn a comission at no cost to you.

Without Wade (and other related precedents), states may curtail the right to abortion and, more generally, block access to contraception and encroach upon rights protected by the U.S. Constitution.

This book contains the text of Justice Samuel Alito's majority opinion, 1st draft, of the decision to kill Roe v. Wade and give states a power they have sought for the last half century. Read for yourself the wild and unhinged arguments Alito makes, such as citing a 17th century man who considered women as property and had two executed for practicing witchcraft. Read Alito's arguments that history and tradition outweigh rationality and justice.

My overview sheds light on serious issues with judicial appointments and efforts by the far-right to establish theocracy in America.

How American theocrats are using state power to (again) outlaw abortion and infringe on your privacy and due process rights: 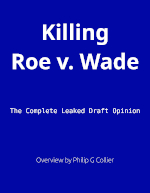 Jistices Samuel alito, Amy Coney Barrett, Neil Gorsuch, Clarence Thomas, and Brett Kavanaugh are accomplishing the will of the Federalist Society and Council for National Policy (CNP), not the majority of Americans.

Do it today - click on the paperback or ebook and see for yourself how seriously un-democratic our Supreme Court has become!

Get Started With Linode - Free $100 Credit