THIS INEXPENSIVE WIFI DISH ANTENNA OUTPERFORMS ALL OTHERS!

Presented here is a project showing how to convert common satellite TV antennas into high performance wifi dish antennas. A large 2 or 3 meter diameter wifi dish can provide 802.11 connections to access points dozens of kilometers away. The path must be line of sight - free of hills, buildings, or other obstructions. When used with a high power wifi adapter this kind of antenna is fantastic. Satellite dishes are easy to convert into wifi dish antennas. The essential change is replacing the satellite TV feedhorn with a modest directional wifi antenna. None of the manual "curve making" of scratch built parabolics is necessary. To successfully convert a dish for wifi use, you need a C or Ku band reflector in good condition and basic tools for measuring, cutting, and bolting parts.

Note that if your goal is to get wireless internet from another location and use it indoors, you should instead consider using a wireless bridge. If you want to provde strong wireless internet coverage to an area, but cannot provide a fiber optic or ethernet cable to your wireless router, again consider using a wireless bridge to substitute for the unavailable cable, and connect the bridge to the router. This is a better solution for situations such as:

Wireless bridges work like a long run of ethernet without cable...

Obtain an undamaged parabolic reflector designed for C or Ku band satellite television service. These are now inexpensive and abundant. The wifi dish pictured above was built from satellite TV gear discarded by a local resident. Similar reflectors can be found in thrift stores, flea markets, and other habitats of electronic scroungers. Seek moderate to large reflectors (at least 76 cm or 30 inches diameter), since these will provide greater gain and directivity. Again, make sure the reflector is in good condition and free of dents! If it is merely rusty, that is okay. Use sandpaper to remove the rust, then repaint the reflector. 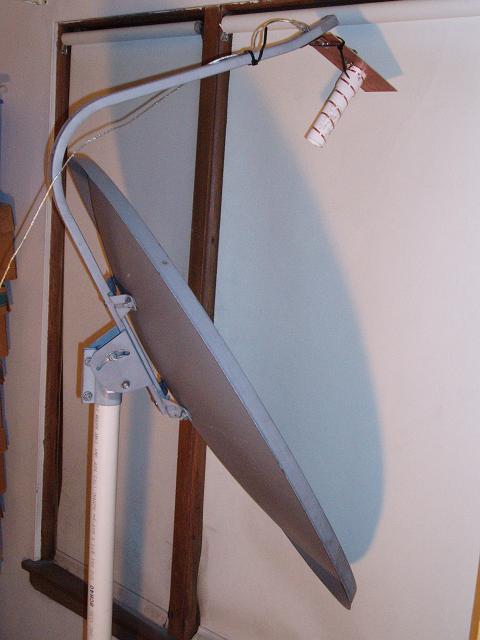 BUILDING A FEED FOR THE WIFI DISH ANTENNA Another wifi dish antenna feeder option is a 3 or 4 element yagi wifi antenna mounted at the focal point and aimed into the reflector. Yagi feeders for wifi dish antennas are simple to construct, durable, and effective.

Note that a wifi biquad, biquad, or "cantenna" waveguide feed would work well in a wifi dish antenna, and would have a slight polarization advantage over a helical - but would lose more signals in rain and not work as well with signals reflecting off of buildings, hills, vehicles, etc. The biquad wifi antenna pictured below was built out of junk parts one afternoon, and enabled very good long range 802.11 connections on its own. Mounted at the focal point of a surplus DirecTV dish, it provided full-scale signals from otherwise weak access points.

Installing a wifi dish antenna is more complex than it initially seems. Consider how the antenna will be used: for a fixed point-to-point link, scanning the area for usable free hotspots, or a portable link back to one's home access point? A fixed antenna can be aimed and bolted into place. A steerable or portable dish needs a means of securely mounting and aiming (motorized or by hand).

Offset feed antennas originally designed for modern Ku band digital TV require special mounting and aiming technique. The best method is to invert the mounting hardware and angle the dish to about 75 degrees for peaking signals on the horizon. In azimuth, aim directly at the desired access point, but in elevation, offset about 37 degrees. The webmaster's antenna stands atop a vertical length of 2" schedule 40 pipe. A prime focus wifi dish, on the other hand, can simply be mounted on a pipe and aimed directly at the signal source. 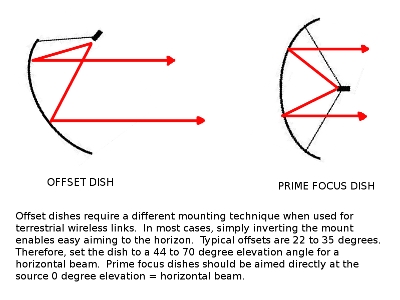 These wifi dish antennas are very directional! It is common to scan an area and see weak signals just barely detectable when out of the beam. As the antenna is aimed directly at the distant access point, the signal strength will jump up considerably - perhaps to full scale. High directivity associated with wifi dish antennas is good: interference from off center stations is reduced and faster broadband connectivity is possible for distant access points.

All of the parabolic wifi antenna feed types discussed here are intended for connection to USB wireless adapters. Yes, extended range connections are possible with a simple USB wifi adapter mounted at the reflector's focal point, but for maximum performance, the adapter must have some kind of directional antenna directly feeding the RF circuitry. Make it easy, and find a wireless adapter with a removable external antenna. Then, unscrew the original and replace it with the yagi, helical, or biquad homebuilt antennas. Mount this at the reflector focal point and go for those cross-town or cross-county links.

As to getting the wifi data into the computer, use USB extension cables for the shorter runs. Powered USB hubs can be used for longer runs when the computer is 15 or 20 meters away from the wifi antenna. One user actually mounted the antenna outdoors, on a rotator, and connrcyed three sets of hubs and USB extension cables to reach is office computer. He then had access to five full strength wireless hotspots and was never without free (as in beer) broadband. In another case, a farmer set up an attic mounted indoor parabolic, by a window, for wifi access to another of his buildings. He used two powered USB extensions (essentially a data repeater built into the cable) to reach his desktop system and have wireless broadband.

Good luck, and may you enjoy lots of long range wifi connections!