Read the ebook about wifi antenna construction and range boosting.

Build this wifi antenna when you want results FAST and have just a few inexpensive tools and supplies available. It will greatly extend your ability to reach wifi access points - well beyond the limits of the dipoles supplied with most routers and some wireless adapters. When connected to a typical USB wireless adapter, the performance is excellent. When connected to a high powered wifi adapter, the performance is astounding! Forget about building those overly hyped wifi cantennas - they don't perform anywhere close to the yagi antennas depicted here. This antenna works best when connected to a wifi adapter, and it works very well as a single router antenna (to extend the range of an access point). Read more below for instructions and a narrative of how they were designed.

Wireless bridges work like a long run of ethernet without cable...

If you are interested in building a high gain wifi yagi antenna, continue reading below for the details.

Yagi wifi antennas can be rather difficult to build, but it can be done if you measure precisely and cut precisely. The hard mathematical design work for the wifi antennas shown here was accomplished elegantly using a yagi antenna modeler, created by Kevin Schmidt (W9CF) and Michael Lee.

The on-line antenna modeler initially starts with several examples tailored for operation in the amateur radio bands. One of the best designs is the classic K1FO yagi. By following a few steps, the antenna can be scaled for the 2.4 Ghz wifi 802.11 b/g/n frequencies:

The elements list will show each antenna element, from the reflector (element 1, position zero mm), to the last director. Do not use a different metal or a different diameter of metal for the elements, or performance will suffer. Changes in element diameter, metal type, or design frequency will need recalculation and the generation of a new elements list. These dimensions work quite well:

Below is a graphic, meticulously adapted by AB9IL from the modeler, which shows element lengths and positions along the boom, measured from the reflector (location zero millimeters). Note that the driven element is depicted in green, and for the wifi yagi project, will be a folded dipole. Why a folded dipole? It provides a good impedance match to coaxial cable when used as the yagi wifi antenna's driven element. In free space, a folded dipole has a 300 ohm impedance at resonance, but the impedance drops drastically when parasitic elements are brought into close proximity.

Print and use this plan view when building the 15 element yagi wifi antenna.

Print and use this plan view when building the 20 element yagi wifi antenna.

This high gain wifi antenna can be constructed in a couple of hours and requires some measuring, cutting, bending, and bolting of metal. Use caution around the sharp edges. When finished, put it up and enjoy a very durable antenna that provides outstanding wifi performance.

Assemble the yagi wifi antenna following the steps below, starting with preparation of the boom, followed by mounting the elements. After the elements are mounted, a suitable connector is added, and the antenna is tested over-the-air. Keep in mind that it can be connected to most usb wireless adapters by cutting the circuit board antenna trace and patching in a pigtail feeding the antenna. 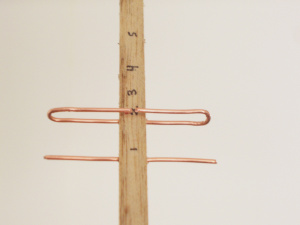 After all of the elements are measured, cut, and mounted, the antenna should resemble the finished yagi pictured below. Connect the pigtail or connector to the driven element. Then connect the wifi adapter or wireless router to the antenna and start checking over-the-air signal strengths. Note that the antenna may be sensitive to polarization: when the antenna seems to bring in the best signal, rotate it to find the best polarization. Mounting the antenna is possible using commonly available hardware, such as 90 degree angle brackets, U bolts, or even velcro.

For the most practical method of signal checking, consider using a wifi auditing utility such as Kismet or Slitaz Aircrack-ng. Either of these will produce a rapidly updated received signal strength indication that is useful for comparing or aiming wifi directional antennas. Make a set of measurements for any desired wi fi access points on the original antenna, then make a new set for the yagi wifi booster antenna. I have built a bunch of these over the years, and they sure work well.

If you are enjoying these wifi antennas which will boost your connectivity, have a look at my wifi dish antenna (for extreme gain, but large) and wifi helical antenna, which is lightweight, durable, and good when getting signals through rain and multipath (reflections from buildings).