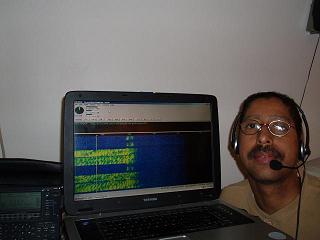 Routing cables for digimode dx. (circa 2005) 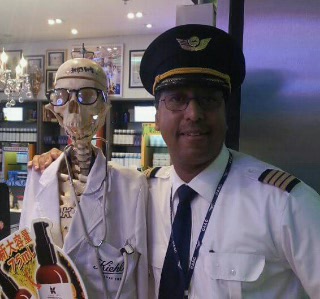 Captain Philip and skeleton (circa 2011). 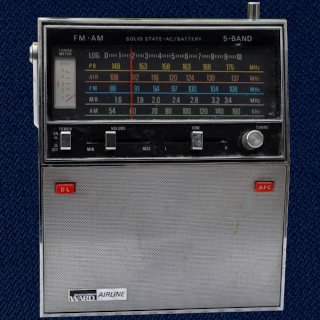 Around the year 1976, I was a young man growing up in Baltimore, Maryland, and unaware of the world of radio. Then, one evening, I happened to tune around on an older brother's multiband radio. It was a much underused device, a Montgomery Ward Airline GEN-1461A 5 Band radio. It covered the so-called "marine band." There were time signals, VOLMETs, amateur radio stations, and all sorts of other interesting signals fading in each evening. Before long, I had developed quite an interest but not much skill or knowledge in mediumwave band DX listening. My knowledge of electronics and radio theory were quite limited as no one in my circle of family and friends knew much about these things. Over the coming months, I spent time in the library and visited bookstores, digging into my new favorite subject.

Disclosure: AB9IL.net is a participant in the Amazon Services LLC Associates Program and others, such that this site earns advertising fees by linking to commercial offers. If you make a qualifying purchase after clicking a link on this website, the associate affiliated with this site may earn a comission at no cost to you.

In early 1978, a neighborhood friend and newly licensed ham, Marc (KA3ARF), suggested I get involved in the amateur radio service. Back in those days, to get an FCC Novice class license, one had to send and receive 5 wpm morse code as well as taking a test on regulations and basic radio theory. Licensed originally as KA3BVX (later as KG2DH and AB9IL), my main interests were working distant CW stations and listeningto various utility stations in the aviation, military, and maritime services. AM operation was popular then, and operators Timtron (WA1HLR) and Jeff (WA3UAN) regularly held court on 3.880 MHz in my region of the USA.

I quickly discovered that most radio equipment designs were a balance of mathematical engineering tradeoffs. Stability vs tuning range, fidelity vs readability, features vs cost. Soon I was learning to modify my receiver in order to make it more sensitive, install better filters for better selectivity, filter the power for a better CW note, etc. In my opinion, the best learning in radio is accomplished "hands on" experimenting, tweaking, testing, and refining. I learned that along with experience, studying the underlying theory and mathematics is essential for radio's advancement.

Working around the demands of career and family, I have just dabbled in radio through the last thirty years or so. Working as a jetliner pilot, I actually do quite a bit of HF and VHF operating, but it is mundane work: position reports, clearances, and other similar air band comms. I used to monitor these as a young utility DXer! My amateur experience consists of HF and VHF activity, with plenty of QRP operation. Enhanced single sideband and digimodes have been a favorite interest of mine since the late 1990s. My education and career have indeed focused on global travel and global communications.

After earning the Amateur Extra class license, my interests focused on commercial radio licensing. I studied, tested for, and earned the GROL + Radar, GMDSS Operator / Maintainer, and 2nd Class Radiotelegrapher certificates. Why? Because there is always another mountain to climb in radio! There is always another adventure and another aspect to master. Okay, there is another reason: airline careers are always subject to disruption, and it is good to have other skills for use during furloughs and between flying jobs. I've been tossed to the street multiple times in corporate bankruptcies.

More recently, my activities have focused on software defined radio and digital signal processing. Signals can be both generated and demodulated in a computer with the proper software. Digital signal processing can perform amazingly for bringing radio signals up and out of the noise. In addition, radio networking technology makes it possible to send staggering amounts of data - enough to transfer in seconds what would take hours on voice or CW. That is pretty slick indeed! I regularly listen, from my apartment in China, to all sorts of HF broadcasts picked up in Europe, North America and elsewhere, transferred past the censors and state media via the internet. These signals are inaudible at my residence, as they are jammed fully to hell by the Firedrake Jammer transmitting from Hainan, China.

This site's aviation pages stem from my experiences as a pilot. I have flown the Beech 1900, Saab-340, Boeing 727, 737NG, 757, and 767 over a time span of about thirty years. There is much worth writing about, and I have often photographed interesting things in the course of flying all over the world. Enjoy the aviation photo galleries and articles here at ab9il.net.

As a result of living as an expatriate pilot in Asia, I've become an expert user of censorship circumvention tools. I now write plenty of content teaching how to unblock the internet and enhance privacy. These are techniques and technology helping countless people to exercise freedoms of speech, protect privacy, and defeat attempts to suppress such freedoms. Dictators and supporters of two bit punk governments will not like my website, but I intend to promote liberation technology on this site. We are all created as equals. We are made of the same carbon, billions of years old. These freedoms come from our Creator, not from the benevolence of any government.

In my spare time, I develop Linux distributions which help people access worldwide over the air radio media (Skywave Linux), evade state censorship and surveillance (MOFO Linux), and use programming as a tool to gather and analyze data about our world (Catbird Linux). Be sure to visit my other websites if you have a spare moment! Look for me on YouTube on the Mach 7 Radio Intercepts channel. I post a lot of SDR recordings, explore useful Linux code and applications, and share video I have taken while flying the jets.

It is a wild world, friends, and I have taken my side on the issues. With a smile, visitors, I wish you all well. Take good care of that ancient carbon you are made of.

Get Started With Linode - Free $100 Credit