Webmaster's Note: This letter began circulating late on August 16 or early August 17, 2019. Company policy toppled in about two weeks from the standard airline policy of "stay out of trouble; don't hurt the company image" to "we won't tell you what to think" to "don't support or attend protests" and deep down to "show loyalty to the Mainland don't show an iota of support to the protest movement." The doctrine of One Country Two Systems has been erased for the top corporations in Hong Kong. Despite the pressure to capitulate, Hong Kongers insist on democratic governance and promise civil unrest if that governance is not realized. It was only a matter of time before Cathay Pacific employees carried out acts of resistance.

[Translated by software from Chinese to English]

Over the past two months, more than 2 million Hong Kong people have spoken with actions.

It is a pity that the deafening public opinion has not motivated the government to respond positively. Instead, it has brought more than 1,800 tear gas canisters and violent arrests of more than 700 protesters. Also, there are countless cases of serious injuries, including broken bones and loss of eyesight.

Recently, the people of Hong Kong did something thought impossible. They caused Hong Kong International Airport to stop on three occaisions. At the same time of attracting international attention, the state machine began to carry out political suppression on all aspects of the airline. It used the false pretext of flight safety to force the company to dismiss employees who supported the protesters, used white terror to destroy freedom of speech, and unscrupulously pressured the company's top brass to resign.

When Hong Kong's fine system is eroded until freedom of speech and assembly are lost, Hong Kong will no longer be Hong Kong.

Hong Kong people, we have retreated. Pleading for mercy cannot be a way of life.

The spirit of the Lion Mountain represents not the golden age of the harvest, but the perserverance, unyielding faith, and unity of each generation of us.

Hong Kong People should have the consciousness of fighting the waters, never giving up, and restoring Hong Kong.

The five major demands are indispensable:

Hong Kong people, 818, see you in Victoria Park. A class of HongKong citizens and Cathays

The people of Cathay Pacific are divided, with some willing to accept repression in exchange for their jobs, while others would rather keep their freedoms and follow other career paths. Be aware: If you decide to run from a fight or accept repression, plan to live that way forever. Little concessions add up to a life of subservience, on your knees. Little acts in defense of liberty add up to a life as a free person, on your feet. 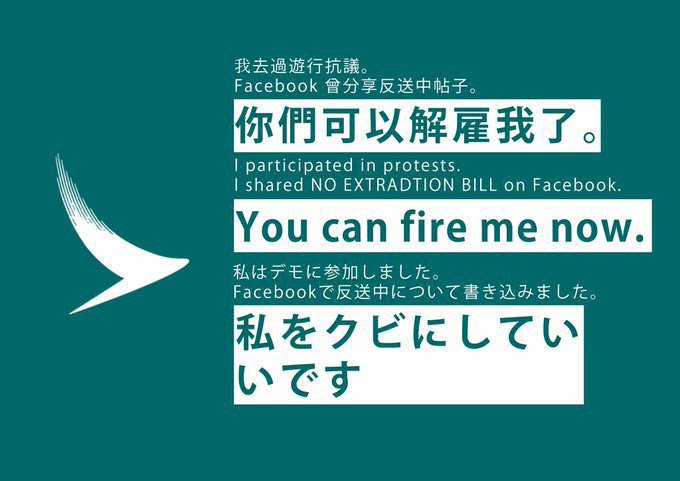