Andy's Ham Radio Linux is now up to version 15, and hit the wires about ten hours ago. I've been quite happy with version 14, so was pleased to see an even fresher version of Andy's Ham Radio Linux. If you're not familiar with this distro, it is the "cat's meow" of Linux systems focused on amateur radio. Non hams will also find it useful as there are plenty of smoothly running apps supporting satellite tracking, digital mode radio operation, software defined radio, special calculators, and so forth.

Downloading the DVD iso file from Andy's Sourceforge page was moderately fast. I've uploaded it to Linuxtracker, and the download should be blazing fast due to plentiful seeders on line sharing the file. After downloading the iso, I immediately used unetbootin to install it on an SD card to carry around and use on several different computers.

Once the system is started, the desktop appears.... 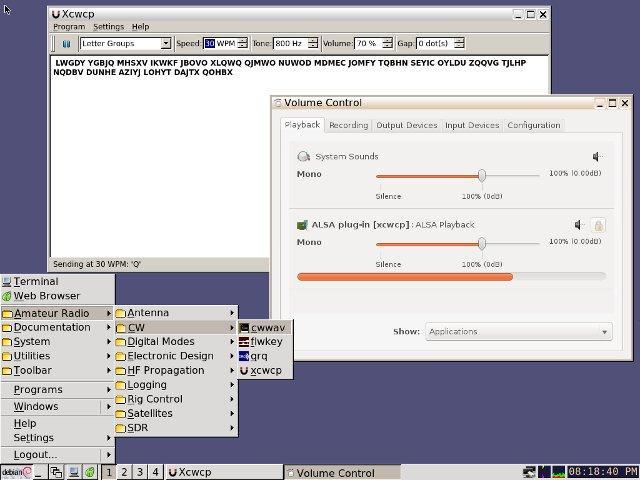 Andy's Ham Radio Linux has GNU Radio already installed, with GQRX as a very nice GUI for many kinds of software defined radios. I have enjoyed using it with an RTL-SDR to tune the local FM band (in clean stereo!) and aircraft communication bands. For ADS-B, an application called "Dump1090" is ready to run. Other modes such as PSK-31, WSJT, RTTY, and others are available.

Satellite tracking is something else I tried with Andy's Ham Radio Linux. I was able to track NOAA weather satellites, the International Space Station, and OSCARs. My RTL-SDR is not very effective for weak signal work, so I was just barely able to detect the weather satellites. With a better antenna, the included software should decode the signals nicely.

One of my favorite SDR programs is QtRadio, which has very well written code from the ghpsdr3-alex project. It can run a local DSP server for various SDRs and also stream audio from remote SDRs around the world. Like GNU Radio, it can be a laborious task to download, compile, and install the software. I didn't want to alter the software setup on my main comuter system, Siduction, which runs Debian Sid. Andy's Ham Radio Linux seemed like the perfect place to put QtRadio. It was not easy to work out the kinks, but I now have a running version! If you want to install it, follow the instructions below.

Note: This will cause removal of Jack Audio packages. I use one version of Andy's Ham Radio Linux for QtRadio and another for GNU Radio and the Aack Audio routing system.

First, freshen the system and install the prerequisite packages. Some are already installed in Andy's Ham Radio Linux, so open a terminal and do an update. Remember, the "$" means do it in the terminal as a normal user. For root permssions, the normal user will use "sudo":

Remove Qt version 4, which is one of the packages which comes installed in Andy's Ham Radio Linux.

After the update is completed, several new packages must be installed. It is not possible to paste into the terminal as the system is configured. Work around the limitation by installing from a list within a text file. Create a file called newpackages.txt with the following content:

Save newpackages.txt in the home directory. Next, install using tha apt utility:

Codec2-dev, due to some recent software changes, does not put the compiled files where ghpsdr3 expects to find them during the build process. Manually move all of the newly written codec2 files from /usr/local/include/codec2/ to /usr/local/include/:

Finally, begin getting qtradio from git:

You can compile and install using any of the branches developers are working on. For example, the iw0hdv branch has RTL-SDR support being developed. Other branches are working on advanced DSP processing with graphics cards, different codecs, and so on. If changing branches after building another, clean up first!:

Configure git to use the master branch for the best stability and fewer troubles with unstable builds:

First set the path to the version of qt you are using. E.g. for qt5 (Debian's qt5-default package):

Compile, build, and install QtRadio with these commands in the terminal:

The whole installation process above takes some time to accomplish on a typical home computer or laptop. Watch the output for error messages and address whatever comes up. On a fresh version of Andy's Ham Radio Linux 15.1, there should be no error messages.

After the build process finishes, start QtRadio with this case-sensitive command:

Start to finish time was about an hour on a modest dual-core laptop, with a 3 megabit internet service (choked down to 100 kbps or less by the beastly Great Firewall of China), and four gigabytes of memory. While working out the kinks to write this page, I burned about one day and consumed way too much coffee and beer... The net result is a nice system enabling the user access to high performance SDRs around the world as well as another means of offering, on a global scale, access to local radio spectrum. Enjoy it!