Siduction is a Linux distribution which uses software from Debian's unstable branch, featuring the latest, cutting edge versions of software. It is codenamed "Sid," after the Toy Story character. Software in Sid is considered to be "still in development" - with lots of new features - but not ready for movement into Debian's stable branch, where everything "just works." Thus, a Sid user enjoys all of the newest goodies in Linux, but also bears the risk of some updated packages being buggy or not working well with other components on the system. What makes Siduction special is its development team which is quite good at stabilizing Sid so that it runs smoothly and "just works" like Debian stable. Siduction releases updated distros once or twice a year with a well rounded collection of applications for typical home or business computer users. Users with specialized needs can then install software packages to build a computer system that does what they want, and with bleeding-edge Siduction style. 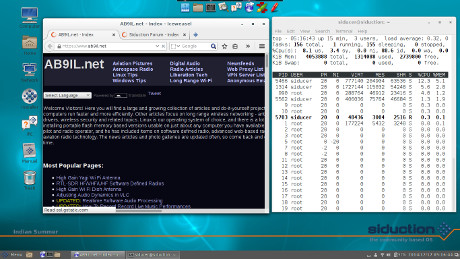 The Family Lineage of Siduction

I first found Debian Sid through Sidux, a distro which was popular in the mid 2000s. Sidux had a solid base system and lots of bleeding edge add-on software. It was more bleeding-edge than Knoppix and Ubuntu, with which I had dabbled a bit. Configuring Ubuntu to use Sid software did not go well at all. The packages had tangled dependencies which were impossible to sort out. Things were quite a bit easier using a Linux distro designed from the beginning to use software in Sid. Using Sidux, I had the latest kernels, audio, video, office, and productivity applications. I liked Sidux, but the people developing it had some difficulties working together...

Sudux developers had conflicting opinions regarding how the distribution should evolve. They renamed the distro "Aptosid" in 2010. Further creative differences in the team resulted in a division into two groups. One group continues work on Aptosid, and haven't released any updates since early 2013. The other group produces Siduction, and is much more active in their development work. Their latest work, released in May of 2014, features the LXQTdesktop and systemd among its cutting edge internal system features.

Siduction's development team does a very good job of making sure each release, in its stock form, works smoothly and has the essential software for personal / office / desktop / laptop computing. Their main task is "stabilizing Sid" and making sure all of the components work smoothly for the end user. They do a good job at making Sid run smoothly, and have also added a nice collection of small applications for managing the system.

I downloaded the DVD iso file from Siduction Indian Summer - Cinnamon Download Page. After downloading the iso, I immediately used the dd utility to install it on an SD card to try out on several different computers.

Siduction worked well on my rickety dual-core laptop. It also with good speed on the public "business center" computers I encounter during my travels. One hotel my company often uses for its crews equips its rooms with aging desktop machines using Windows XP. I have often fought the temptation to wipe the hard drive on these beasts and install a system such as Siduction. It can run well on older hardware and is faster than greased lightning on a powerful multi-core system with ample memory. I enjoyed using Siduction "Indian Summer" so much that I installed it to the hard drive on my laptop and used it for several days. Installation was an easy process of following the menu prompts and making some choices as to what partition to use for the main system and home directory, setting the time zone, and other specifics. Being a minimalist system in comparison to Ubuntu and Mint, it has no bloat and is not hard to configure to suit one's specific preferences. For the vast trove of software available in the Debian Linux repositories, I simply made some edits to to the Apt (Advanced Package Tool) sources list.

If you are a new user of Siduction Linux, consider taking the time customize your computer soon after installing the base system. For business or school use, install LibreOffice. If you produce multimedia then install Jack Audio, Ardour, LightWorks, Audacity, or their other favorite audio / video tools. I wasted no time and switched my internet browser from Iceweasel to Firefox Nightly. Iceweasel works well, but I sync my bookmarks among several machines and use certain Firefox features and add-ons that make my work easier.

Siduction is not totally froo of rough edges, and there have been instances of breakage after downloading upgrades. Indian Summer comes with Linux kernel 3.17, with very good hardware support. In the past, I experienced a kernel upgrade which temporarily misconfigured the laptop touchpad, causing the pointer to move too slowly. Another upgrade on a system using LXQT caused the taskbar / panel to display about three times its proper thickness. Such are the small annoyances of using Debian Sid; experienced users of Siduction suggest limiting upgrades to those few times when a specific new feature is desired. That is good advice.

Overall, Siduction with the Cinnamon desktop is a functional, lightweight, and good looking Linux distribution nicely satisfying for users seeking bleeding edge features and a clean platform upon which to build a top notch customized system for the home, office, or studio..