Skywave Linux has upgraded to version 4.2, and it looks pretty solid, with those floating windows in i3wm worked out. There kernel is now 5.15.14-rt27-xanmod1 5.9.1 and several applications have been freshened. It is nice to have SDR++ now in the iso. 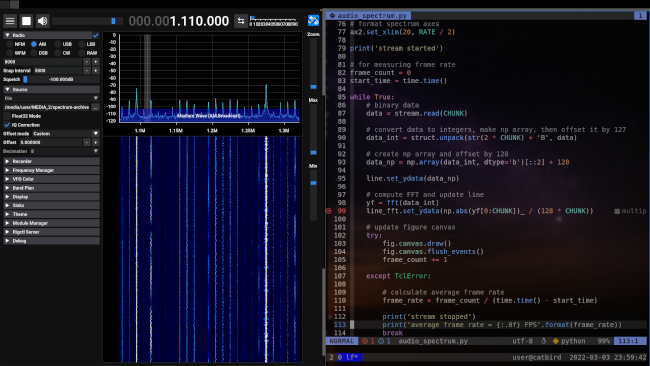 More of the drivers needed to run plugin SDR devices are now sourced from git repositories instead of the Ubuntu / Debian repos. The directory /usr/local/src is packed with fresh source code from cloned repos. Bash scripts there are used to manage updates, where you can simply run a script and it will freshen the local source, compile the binaries, and install them. These are some of the changes:

Skywave Linux v4.2 is a larger iso file, with more programming tools going along with the git source for those SDR drivers. With the increased size, it is more powerful Linux system. Over here, in my world, it has worked well for a number of monitoring, writing, and content creation tasks which involve radio in one way or another. It is a joy for writing Bash, Python, and HTML code. All while running my local SDR to sniff for signals on the bands.