Disclosure: AB9IL.net is a participant in the Amazon Services LLC Associates Program, an affiliate advertising program such that this site earns advertising fees by linking to Amazon.com. If you make a qualifying purchase after clicking a link on this website, the associate affiliated with this site may earn a comission at no cost to you.

Skywave Linux is an operating system using bleeding-edge technology to robustly access broadcast, utility, military, and amateur radio signals from almost anywhere in the world, including countries with restrictive internet environments. Skywave Linux connects to a large and growing network of state-of-the art software defined radio (SDR) servers, making it possible to experience high performance SDR operation without your own large antennas or on-site radio hardware. All you need to do is boot the system on a computer with internet connectivity. Skywave Linux can also operate numerous types of SDR hardware, plugged in or on the local network. Downloading, installing and configuring SDR software can be difficult for many computer users; Skywave Linux eliminates the hassle by including several applications installed, configured, and ready to run. 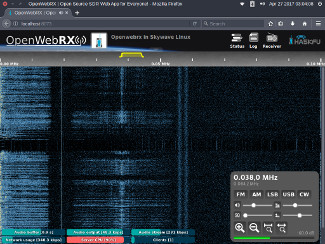 Using OpenWebRX and an RTL-SDR to examine
FM broadcast subcarriers. 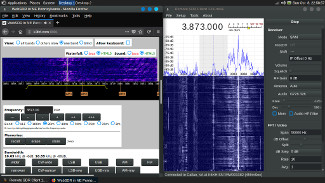 Internet streaming HF signals in RemoteSDRClient
and the K3FEF WebSDR.

For decoding RTTY, CW, PSK, WSPR, WSJT, RDS, and other digital radio transmission modes, the Fldigi and WSJT applications are installed, set to decode audio from the local or remote receivers. Weather satellite decoding is possible with the very capable WXtoImg application. Gpredict provides real-time satellite tracking data and doppler corrected tuning control for Gqrx. In some cases it may be necessary to use the PulseAudio Volume Control application to select the best audio source and levels. Trunked radio systems may be monitored using SDRTrunk.

Conventional radio and video broadcast streams are also supported in Skywave Linux. Kodi Media Center provides access to thousands of music, talk, news, free-speech, and religious stations around the world. Editable playlists of IPTV and IPRADIO stations are located in the home folder.

Use Skywave Linux as you would use any live Linux system:

Skywave Linux is a 64 bit system, built on a base of Ubuntu 16.04 LTS, uses the MATE desktop environment, and draws on the capabilities of Ubuntu: software updating, graphics, system resource management, etc. It is the additional digital signal processing, networking, and signal decoding applications that set Skywave Linux apart from stock Ubuntu Linux. The default username is skywave and there is no password in the default system.

The radio software is largely compiled from source code and can be updated by end users with moderate computer skills, though Skywave Linux is designed for easy use by radio operators with basic computer skills. In fact, a key goal of Skywave Linux is to open the world of HPSDR and RTL-SDR operating to people who enjoy high performance radio but are not computer experts.

It may sometimes be advantageous for users to use encrypted connections which provide stronger privacy, security, and ability to circumvent censorship. For that purpose, the Lantern and Psiphon applications are installed. In addition, basic OpenVPN and L2TP/IPSec connections are supported.

Skywave Linux is provided as-is. No guarantees or warranties are applicable to Skywave Linux. Skywave Linux is based on Ubuntu Linux, but not endorsed by or affiliated with Ubuntu or Canonical Ltd. End users bear all responsibility for compliance with local regulations relating to communications monitoring. 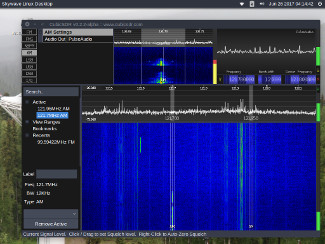 Receiving multiple aviation voice signals
at once useng CubicSDR and an RTL-SDR dongle. 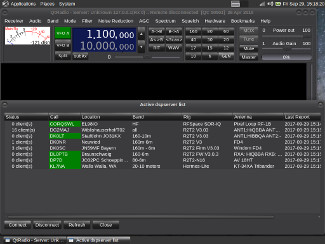 SDR Updater and certain packages using SoapySDR drivers failed to run after switching Skywave 3.1.0 to apt repository drivers. The issues are resolved as of version 3.1.1. Users on earlier Skywave versions should skip to version 3.1.1 or later.

External USB drives will not properly mount in version 3.1.0. Kernel, 4.15.0-xanmod1, with supporting modules, was a bit too fresh and buggy. On fully installed systems or systems with persistence may be updated to a more mature kernel with these terminal commands:

A after kernel installation is complete, reboot and enjoy more device friendly behavior.

Bootloader error in version 3.0: Isolinux is incorrectly pointed to the kernel file vmlinuz.efi instead of vmlinuz. If you use grub or isolinux to boot the iso, edit the file to use vmlinuz. Else, simply use version 3.0.1 or later.

Installer crashes on versions 2.0 and earlier: Ubiquity had a bug which caused installations to fail when selecting languages and time zones. To remedy the bug, use "sudo apt update" and then "sudo apt upgrade" to freshen the running system before attempting a full installation.

Some users report "no audio" on certain hardware. In some cases it is due to the system not recognizing the hardware and loading improper audio drivers. Try the solutions well documented in the Ubuntu forums to modprobe the best audio modules. In other cases, the fault was in a too narrow device specification in the Pulse Audio configuration. In the file /etc/pulse/default.pa, look near line 46 for the code:

Restart Pulse Audio or reboot the system. Check the audio by entering "sound Settings" and clicking the test buttons.

Users with Nvidia Video Hardware: Boot and shutdown times are longer than usual on the current 4.4.0 Linux Kernel due to Ubuntu's use of sub-optimal video drivers. Users who fully install Skywave Linux can download the proprietary drivers and realize faster speeds.

SDRPlay USERS: There is a software bug in Skywave Linux 1.6 which interferes with the configuration of Dump1090 for the SDRPlay. Please use the following shell command to correct the script and restore normal functionality. The command needs to be run only once for fully installed versions of Skywave Linux 1.6. Users booting from the iso file or DVD should run the command once per computing session before running Dump1090 on the SDRPlay:

INTEGRATED CHANGES FOR THIS VERSION OF SKYWAVE LINUX