CubicSDR version 0.1.3-beta has been released, with significant new features and improvements. For software defined radio listeners familiar with GQRX and GNU Radio, it is worthwhile to look at this new interface. New listeners with RTL-SDR hardware will find CubicSDR intuitive, easy to use, and offering advanced features. This article gives instructions and code for installing CubicSDR on a 64 bit Linux operating system such as Debian, Ubuntu, or Linux Mint.

Of note, CubicSDR has the ability to monitor multiple frequencies (within the ADC bandwidth) simultaneously, with independent mode, squelch, and bandwidth adjustments. The webmaster very much enjoyed listening to the two ground control frequencies plus clearance delivery at the local airport - all seamlessly and at the same time! Such a capability is great for weather satellite and military satellite listening, where the action is sometimes found on a handful of frequencies at once.

Direct sampling suport for RTL-SDRs is supported and directly accessible through the settings menu. Simply select the I or Q ADC and couple the dongle to an antenna designed for the desired frequency range. Broadcast stations are easy to monitor in direct sampling mode. Weak signals may require the use of a preamplifier and or filters to reject intererence from nearby broadcast stations. For example, the webmaster found 30 meter amateur band listening is fairly easy, but annoying junk from a local multi-kilowatt mediumwave plagues other bands. One shouldn't need preamplification on LF/MF/HF bands unless the antenna is small or not in an ideal location.

Tuning in CubicSDR can be accomplished several ways. One can pull up a window and enter the frequency, use the mouse wheel, or click digits on the frequency display. Ditto for setting filter bandwidths, oscillator offsets, and the inherent frequency offset due to clock inaccuracy in the radio hardware. 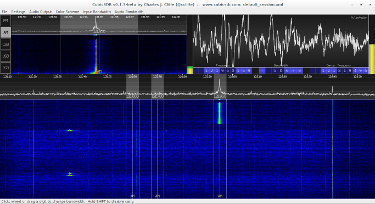 Cubic SDR tuned to three ATC frequencies at once! 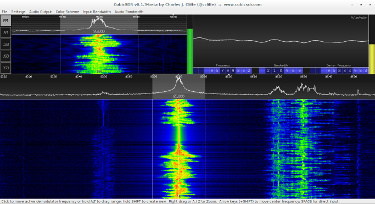 
Installing CubicSDR on a Debian, Linux Mint, or Ubuntu System

First, know that CubicSDR is now included in Skywave Linux, a live Linux system (based on Ubuntu) which can be run from a USB stick or installed on the hard drive. For HPSDR users, QTRadio is installed and there is also browser support for those nice WebSDR sites.

CubicSDR can be installed in about fifteen to twenty minutes on computers of modest performance connected to modest broadband service. A quad core machine with 10 megabit internet can probably do all of the work in ten minutes or less. Most components can be found in the Debian or Ubuntu repositories, but Liquid DSP and CubicSDR must be downloaded as source from Github, then compiled and installed.

Here is a simple script which will download, compile, and install what is needed to run CubicSDR:

If using a 32 bit system, adjust the script as needed. Copy and paste the script into a text editor. Save it as cubicsdr-installer.sh. Make it executable, and run it as root with the shell command:

CubicSDR can be run now by clicking on the CubicSDR icon in the system's "Internet" or "Ham Radio" menu. Using the command "/opt/CubicSDR/CubicSDR" as a normal user works too!

In comparison to its closest peer on Linux, GQRX, many listeners will prefer the ease of use offered by CubicSDR. The ability to monitor multiple frequencies at once gives it an edge over GQRX, though advanced listeners may prefer GQRX's more extensive settings and tweakability. All in all, CubicSDR is quite a slick frontend for RTL-SDR hardware and my preferred way to keep tabs on the aviation, weather satellite, and FM broadcast bands.