When considering using high power wifi devices to cover large areas, some thought should be given to determining the actual needs for the link in question. How much power is required for a good conection? Can transmitter power alone do the job, or must a directional antenna also be used? Is the area wide open, or will the wireless signals have to go through walls, floors, or shrubs?

THE LONG TAIL OF SIGNAL STRENGTH

Consider a scenario of a person intending to connect to their wireless network over a large area - a farm, marina, or warehouse - with walls and floors between the user and wireless router. Perhaps the wireless access point currently peaks at 6 Mbps speed and the question is how to increase throughput. Faster wireless reguires stronger signals, but how much stronger? The answer comes through figuring a "link budget."

Think of your typical wireless adapter, and how it's maximum connection speed increases with signal trength. Using the Alfa AWUS036H wireless adapter as an example of a sensitive device, a -85 dBm signal is needed for 9 Mbps and -71 dBm for a full 54 Mbps. See the table below:


At the other end of the link the access point may be running a typical 100mw, which translates to +20dBm. Assume both wifi radios are initially using those mediocre little dipoles included with the devices when purchased, and the Alfa is receiving the distant AP at a signal strength of -91dBm. Expect a slow 6 Mbps connection. Okay for email, but not YouTube!! The cumulative losses of antenna cables, terrain, distance, and other factors have reduced the signal by 111 dB between the circuit board in the wireless access point to the receiver board in the Alfa AWUS036H. The Alfa, on the other hand, has a transmit power up to 27dBm, and would put about -84 dBm into the wireless access point. The AWUS036H can probably transmit beyond its receive range, considering the power of typical APs.

If a faster connection is desired, more signal will have to be focused on the path with a high gain wifi antenna. A yagi or parabolic on one end of the link could provide a gain of 15 dB, making 36 Mbps to 48 Mbps connections possible. High gain antennas at both ends of the link would easily add 25dB to 30dB to the link, and make full speed 54 Mbps connectivity a reality. That is much metter than a paltry 6 Mbps connection under the original conditions. 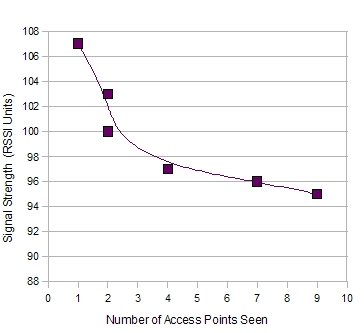 There were only 3 very strong APs (above 102 RSSI units) in view. However, the "long tail" contained another 22 weaker access points! Some of those weak ones could be reachable with high gain wifi antennas and high power wifi interfaces. Not only would the population shown in the chart be reachable "short tail" statistics; a whole new population of "long tail" signals would appear. When using high power wifi interfaces, directional antennas would actually be necessary to limit interference from nearby unwanted sources.

If possible, use a high power wireless router to provide wireless internet access. Also consider using a suitable antenna for the area to be covered. Omnidirectional antennas may be best for large areas surrounding the access point; a wireless dish or wireless yagi antenna may be more suitable if the access point serves users in one general direction. When the acess point is putting out the strongest possible signal, the next level of refinement is up to power and antennas on the client end of the link.

The well known and well engineered Alfa AWUS036H has been mentioned already as a high power wireless adapter, running up to 27dBm / 500mw. It isn't the only device available, however, and the competition is heating up. The EnGenius EUB9603h is a high power, 600mW, 802.11bgn USB wireless adapter that also accepts an external antenna. Imagine the range available if that device is connected to a high gain wifi dish or high gain wifi yagi antenna! A Google Search for high power wireless reveals plenty of excellent interfaces. Ubiquiti and Data-Alliance are notables offering high power wifi adapters in the form of PCI and Mini-PCI cards, though they may not be be best for all computers, as some laptops lack ability to fully power these devices. When in doubt, use USB wireless adapters; power is then not an issue.