Disclosure: AB9IL.net is a participant in the Amazon Services LLC Associates Program, an affiliate advertising program such that this site earns advertising fees by linking to Amazon.com. If you make a qualifying purchase after clicking a link on this website, the associate affiliated with this site may earn a comission at no cost to you.

Something very exciting is transforming radio. It is transforming how we communicate throughout the spectrum, from VLF to she shortest microwaves. Instead of using hardware specialized for specific modes, with their inherent limitations, radio designs are emerging that do most of the work in the digital realm. In essence, hardware captures huge chunks of spectrum, digitizes it, and passes it to a digital processing core. The DSP then carries out functions of tuning, filtering, amplification, noise reduction, and demodulation. Multiple operators can use multiple virtual transceivers - all utilizing one hardware device.

SOFTWARE DEFINITION REPRESENTS A QUANTUM LEAP IN CAPABILITIES! Here is an example - a mere tip of the iceberg:


Before reading more, point-and-click on these networked SDRs for a while, and apreciate that each change of mode, bandwidth, and frequency was once a carefully orchestrated dance of capacitors, crystals, inductors, and resistors. Excellent performance was difficult to achieve and maintain. Now, in the digital realm, these dances are done near theoretical perfection and in less time than it takes for the sound waves to leave your headphones and reach your eardrums! WebSDR software digitally tunes, filters, and demodulates the signals. Digital signal processing code converts the audio to a compressed data stream, creates a visual waterfall, sends it to your browser and soundcard, where you perceive "radio".

Have a look at the RF components of a basic quadrature sampling (QSD) software defined receiver:

Many of these QSD type software defined receivers are capable of very high performance due in part to superior "H mode" mixers, in which solid state switches are used instead of common diodes or MOSFET transistors. The H mode mixer effectively removes a limitation on the dynamic range and linearity of front end components of a receiver, leaving the roofing filter and ADC as limiting factors. Consider the importance of this evolution: preamplification is unnecessary from HF well into the lower VHF range, with the advantage that the receiver stays sensitive and linear despite the presence of extremely strong signals. These mixers can withstand VERY high signal levels! More information on H mode mixer design and applications are given here:


Other SDRs use conventional single or double balanced mixers and are more limited in their dynamic range, but still offer respectable performance. Often, if there is a local HF transmitter operating at the same location, the waterfall will "white out" during RF overloading then return to normal when the transmitter is unkeyed.

After converting the receiver bandpass to a "zero IF," QSD type SDRs use a high quality ADC to digitize the signal and send it for processing in the digital domain. Modern wideband audio interfaces (often used in music and broadcast studios) can digitize a 192 kHz chunk of spectrum at 24 bit resolution, and pass it on for processing in a desktop, laptop, or computing cluster. From there, the processed and detected signal goes to the end user.

Watching two HF aeronautical frequencies at once on a webSDR.

The remote controlled SDRs listed above are all use simple but elegant circuitry which provids very clean, stable, and sensitive reception. University of Twente's receiver started as hardware built "dead bug" style on a piece of copper clad PC board!! Are you impressed? Now, get thee not to a nunnery, but to the gatherings of creative people building the next generation of radio. Most noteworthy are the people of Open High Performance Software Defined Radio project. They are designing sophisticated SDR transceivers, signal processors, and other equipment with an open, free (as in freedom), modular, "from the ground up" philosophy.

You can actually listen to some of the Open HPSDR equipment running on publicly accessible internet servers. The easiest to use software is called QtRadio, and its developers seek to buld a system of transcievers with a client-server architecture and all-mode / all-frequency capability. An android client application is available for free on Google Play, called glSDR, which is quite similar to QtRadio. It works like a dream on a broadband internet connection, enabling the user to access recievers around the world. Multiple reception modes and filters are available. You can literally sit in a coffee shop, connect to its wireless hot spot, and listen to amateur radio, military comms, or FM radio broadcasts on the other side of the world. In fact, the AB9IL webmaster routinely uses glSDR to hear broadcasts unavailable at his residence due to the infamous "Firedrake Jammer." 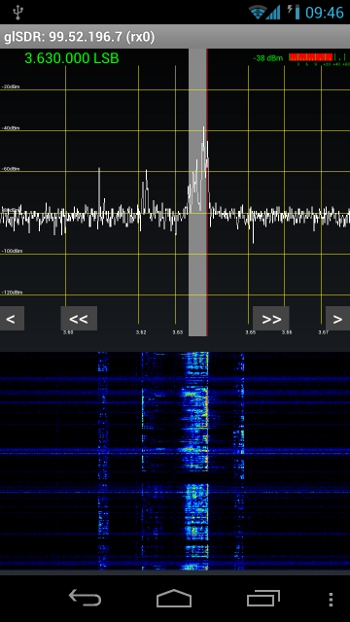 One limitation to always bear in mind when thinking of the benefits of SDR equipment is the balance between computer perfornance, expense, dignal fidelity, and number of simultaneous users. The RF and baseband signals are limited in bandwidth and digital bit depth by CPU, RAM, internal bus speed, and perhaps ethernet or wifi performance. Even FPGA based SDRs have limits as to how much data they can process per second. It means that design choices must be made: offer inexpensive radios with only 8 bit resolution and wide RF bandwidths or choose 12 or 16 bit resolution and design for a lower bandwidth. Else, go higher in performance and build a system with high RF and baseband bit depth and also high bandwidth serving many users at once.

These limitations are immediately apparent in currently popular SDRs. At the high end, there are Flex and HPSDR systems offering high bit depths and bandwidths to just a few users at once, on the local ethernet. At the low end are RTL-SDR stations with WebSDR or OpenWebRX back ends, offering compressed, low resolution audio to many users on the internet.

Depending on stations\' hardware and configurations, signals can sound stunningly clear or like irritating, overly compressed mp3s. Much to the credit of careful design and maturity of WebSDR systems, they not only accept many simultaneous internet listeners, but also have good audio fidelity. KiwiSDR systems are newer and often deployed with lower capability single board computers. These offer full HF coverage but can accept only a few simultaneous internet listeners. Also, the audio bandwidth and fidelity are lower due to back end hardware and network constraints. Over time, expect KiwiSDR / OpenWebRX systems to develop to higher capabilities. To really experience the top notch signal purity and bandwidth offered by SDR architecture, one must visit a station running HPSDR or FlexRadio hardware and a back end PC of moderate capability. "Stunning" is the word to describe the experience.

Imagine a team of radio operators, scattered in different locations all connecting via the internet to one "DSP server" near a place with interesting radio traffic. The DSP server digitizes aND processes band of RF spectrum and provides data to all of the team members with independent SDR "client applications." SDR client capabilities are limited only by network bandwidth, computing power, and developer creativity. The radio operator team could independently tune any part of the spectrum, in any mode, using any bandwidth, applying any noise reduction, and so forth. If everyone connects via true broadband, it is possible for hard processing tasks to be distributed and done in real time. Multiple radio operaor teams could form the ultimate monitoring or emergency communications network. Single operator positions could be as simple (and mobile) as a tablet or iPad computer, running a client application. Read between the lines! It is already possible to digitize and record huge chunks of spectrum and retroactively do all sorts of monitoring signal analysis. The NSA uses SDR technology to analyze phone, wi-fi, and other radio traffic recorded days, months, and years into the past. Why not do the same for tracking intruders or distress calls on HF? As of 2018, there actually is multilateration capability in the network of KiwiSDRs and aircraft ADS-B monitors - all fixing the transmitter location based time-difference-of arrival (TDOA).

Amateur radio is already seeing quite a lot of innovation as shown in projects like the ANAN-200D, FLEX-6000, Quicksilver QS1R, and Softrock SDRs. News organizations such as the BBC are moving to SDRs for their monitoring. Even military SDR applications are being implemented (i.e. PAVE PAWS and Sea Based X-Band radar systems). For a glimpse of how high end, commercial QSD type SDR transceivers are evolving, look at the Flex 5000.

Here are two special things possible with software defined radio that are simply impossible in the analog domain: "tracking RF notch filters" and "enhanced signal clarity". Flexradio has demonstrated both in its latest versions of PowerSDR:

There is quite a lot of open-source / community developed SDR activity. GNU Radio is at the cutting edge in this aspect, and features a modular approach to hardware and software. They are involved in everything from voice communications to television, broadband wireless, and satellite navigation. Of particular interest is their involvement in the $20 SDR / RTL2832U phenomena. While the GNU Radio people didn't start this wave of activity, their software is what makes RTL-SDRs so capable. Those little devices are designed for digital TV and FM broadcast reception, but can receive any signal mode if supported by proper software. RTL-SDRs are currently being used for receiving weather satellite downlinks, aircraft communications (including ACARS and ADS-B), television, FM radio, and conventional amateur radio VHF / UHF signals.

An All-Capable SDR using a DVB-T dongle and GNU Radio.

Hams involved the HPSDR HERMES project have influenced some noteworthy commercial endeavors. One that is especially pertinent is the Apache Labs ANAN-100 transciever, which is a direct sampling SDR covering the160 through 6 meter bands (receive 10kHz - 55 MHz). This radio combines bleeding edge theory with tried and tested manufacturing techniques. Like recent renditions of HERMES, the ANAN-100 can be remotely operated via gigabit ethernet. Signal purity and stability are state of the art, and extensive digital processing is possible. This means the radio can handle all of the current popular signal modes and also, with the proper software, run sophisticated new digital modes. Filtering, noise reduction, speech processing, multiple virtual radios, and advanced signal displays are possible with this SDR - it has the computing power built in. Read the ANAN-100 Spec Sheet and ANAN-100 Brochure for more information.

There is also an ANAN-200 "Orion SDR" in the works from Apache Labs, also based on HERMES technology. It appears the Apache Labs people are quite serious about advancing the cutting edge of software defined radio technology. In a manner similar to the Flexradio-6000 series of radios, the internal hardware is formidable - comparable in computing power to a multi-core desktop computer system, optimized specifically for digital signal processing. The ANAN-200 has multiple ADCs built in, so the radio can be used (with multiple antennas) as an interferometer, direction finder, diversity receiver (for reduced multipath / fading effects) and other uses. In short, the radio is magnificent. 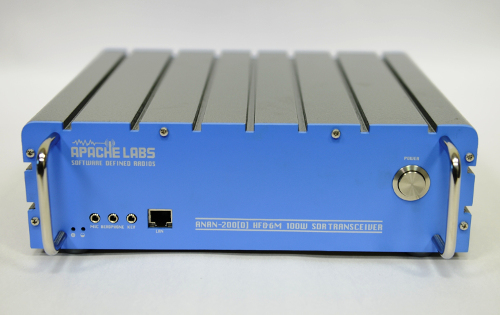 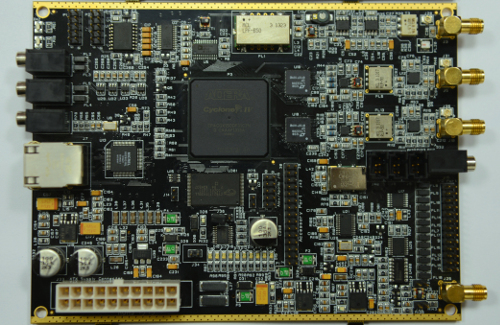 Another notable member of the HPSDR category is LinHPSDR, from John Melton, G0ORX. Persons familiar with the earlier GHPSDR3 or cudaSDR projects will see resemblances, but this new work provides better hardware support and deeper sophistication in features. At the heart of the DSP functions is WDSP, which works beautifully. As with other SDRs, lower latency performance with LinHPSDR requires a fast, multicore computer.

Stay tuned for the latest in software defined radio developments! The field is quite active, with continuous advancement in software and hardware. It would not be surprising to see SDR technologies eventually adopted by the wider telecom and broadcast industry, but hams will see these things first. Hams, as usual, will be the on the bleeding edge of radio, refining it and making it more capable.